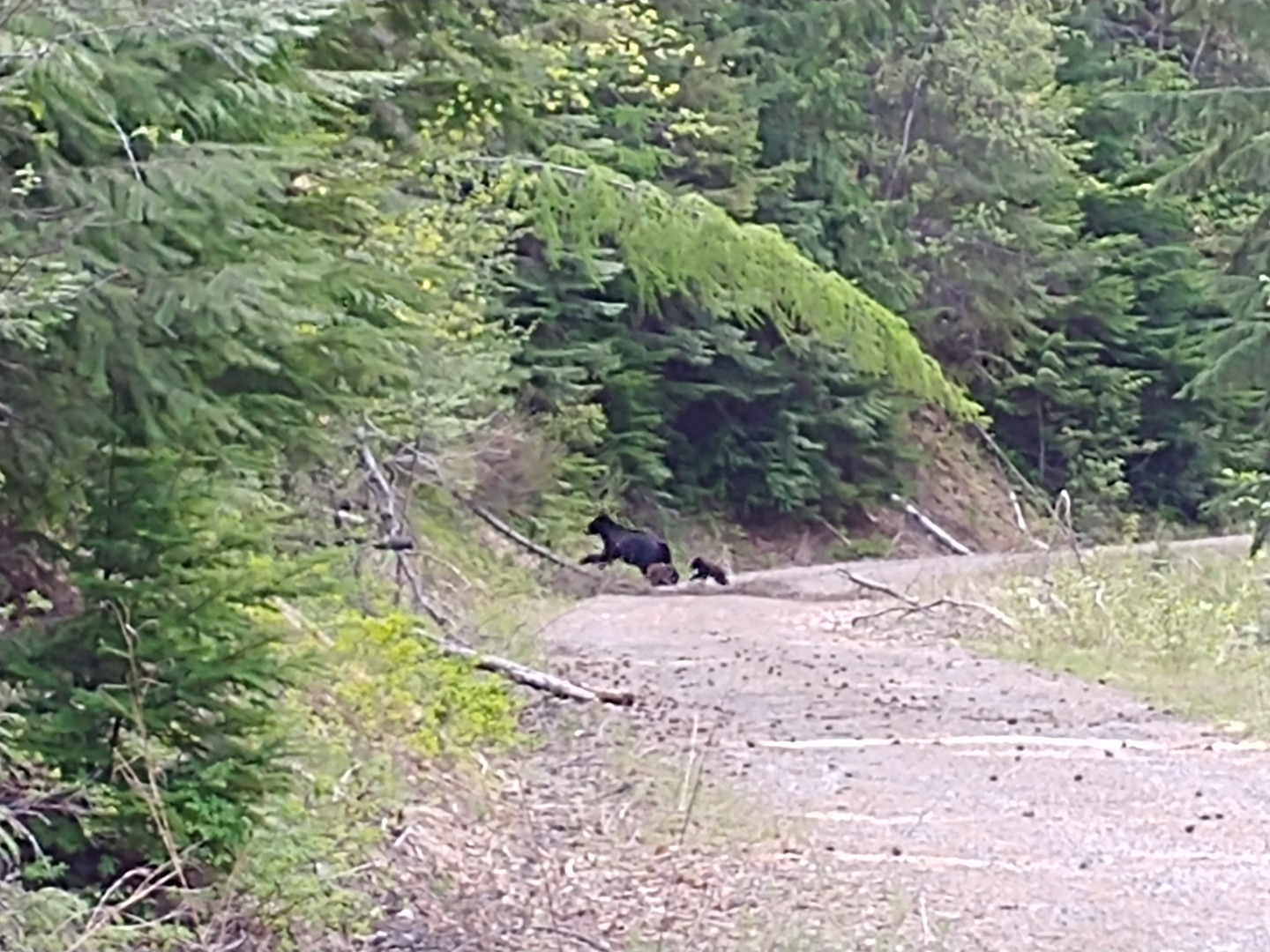 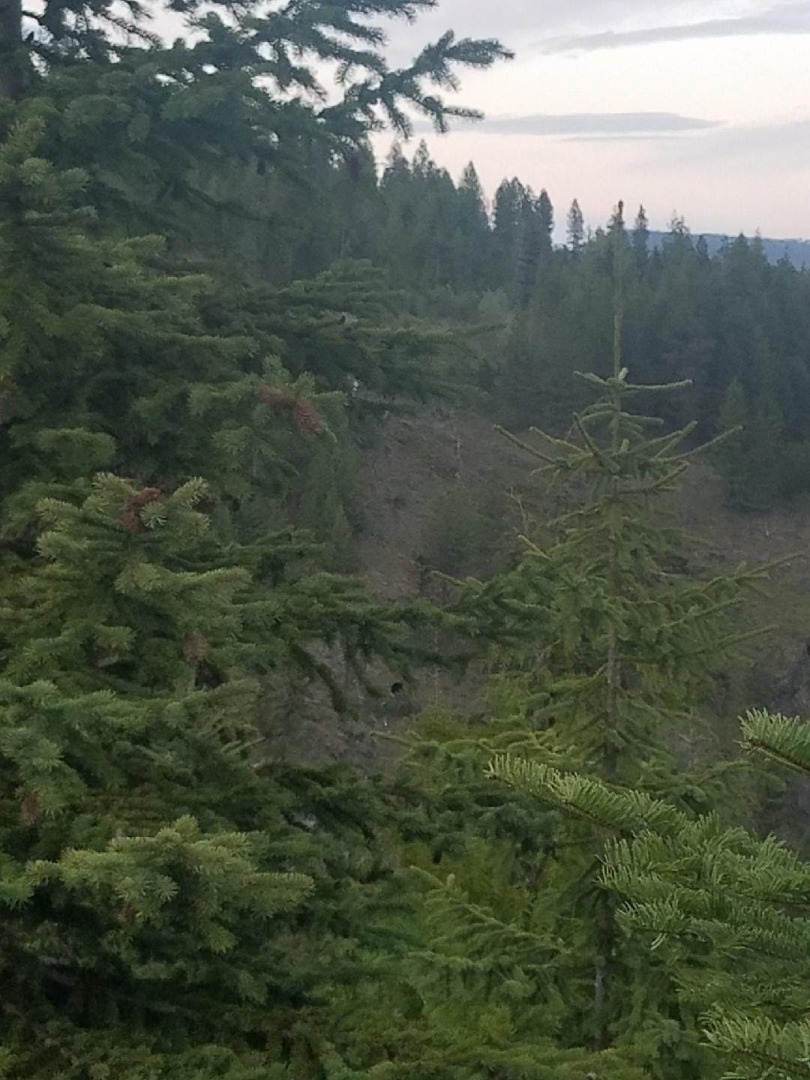 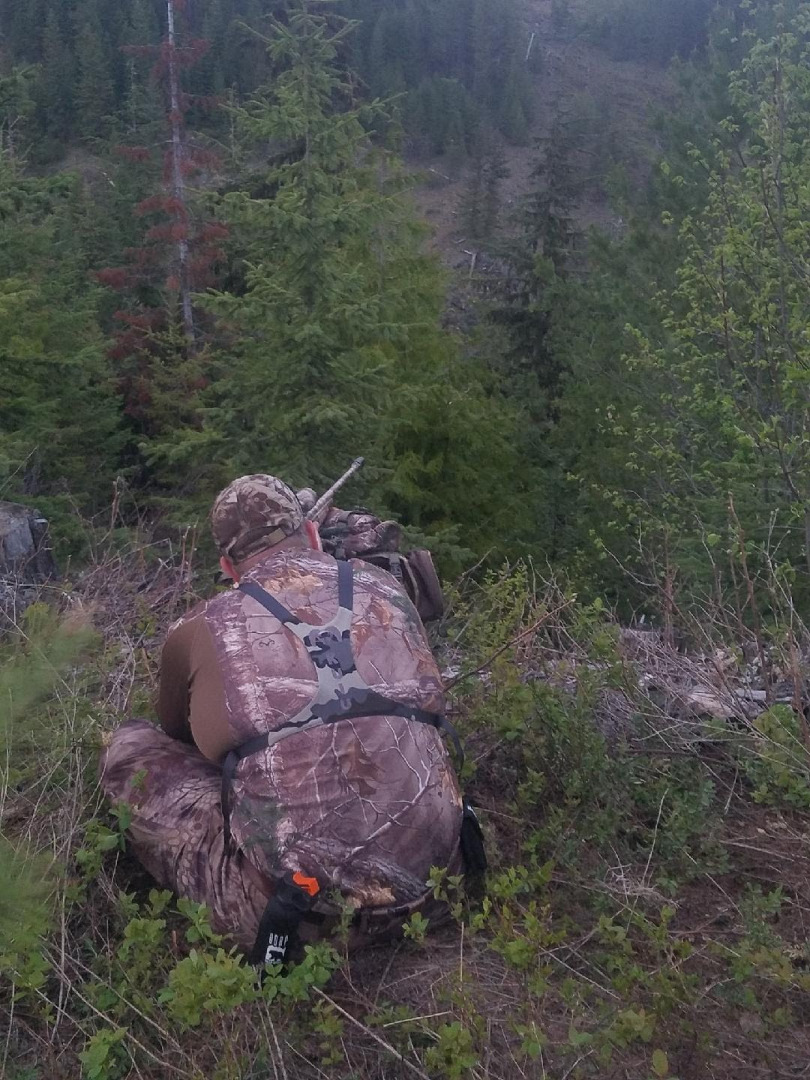 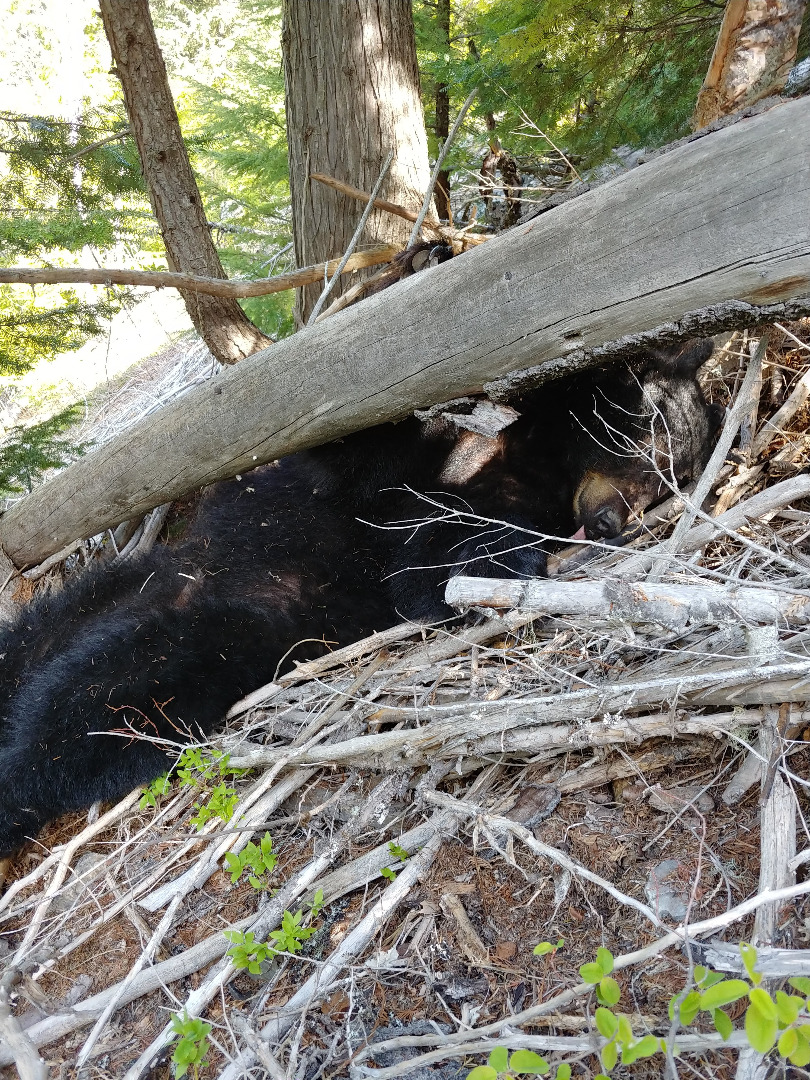 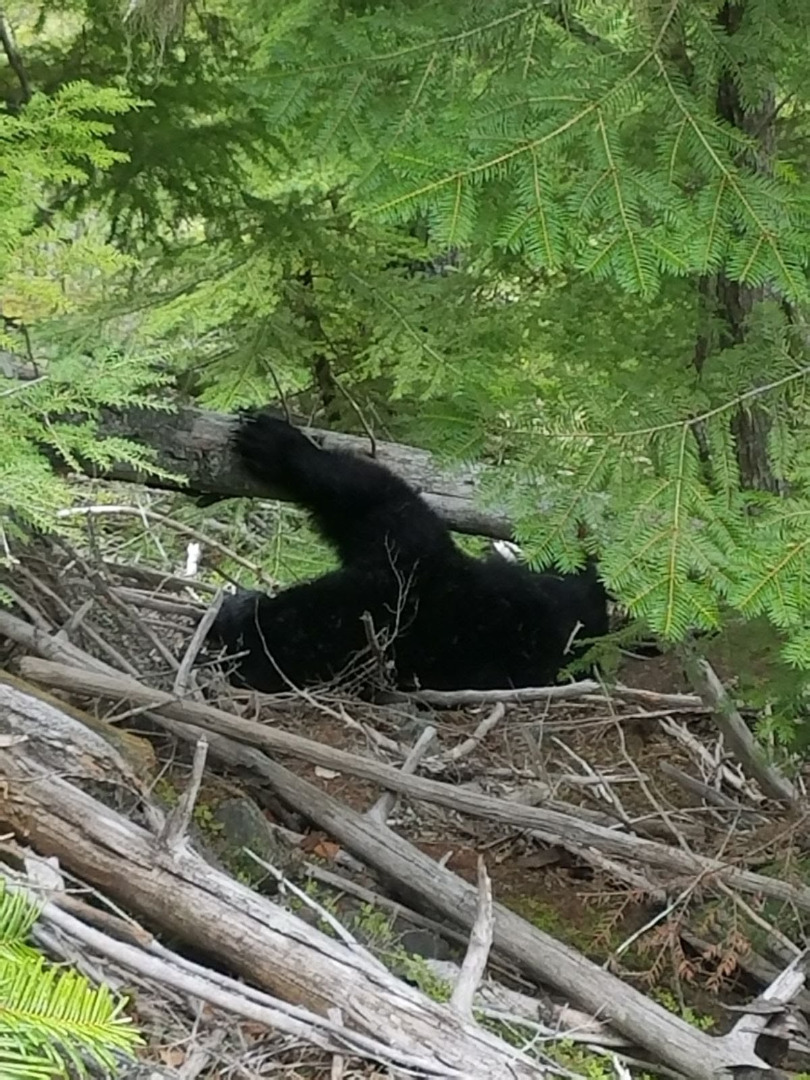 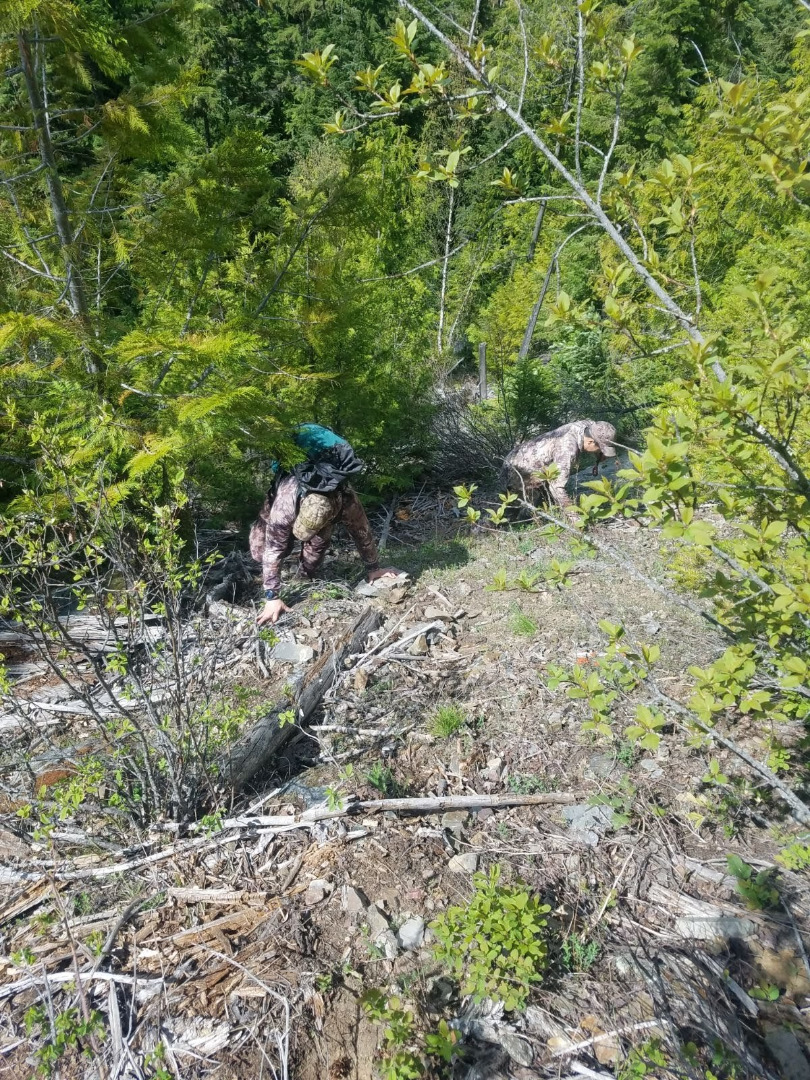 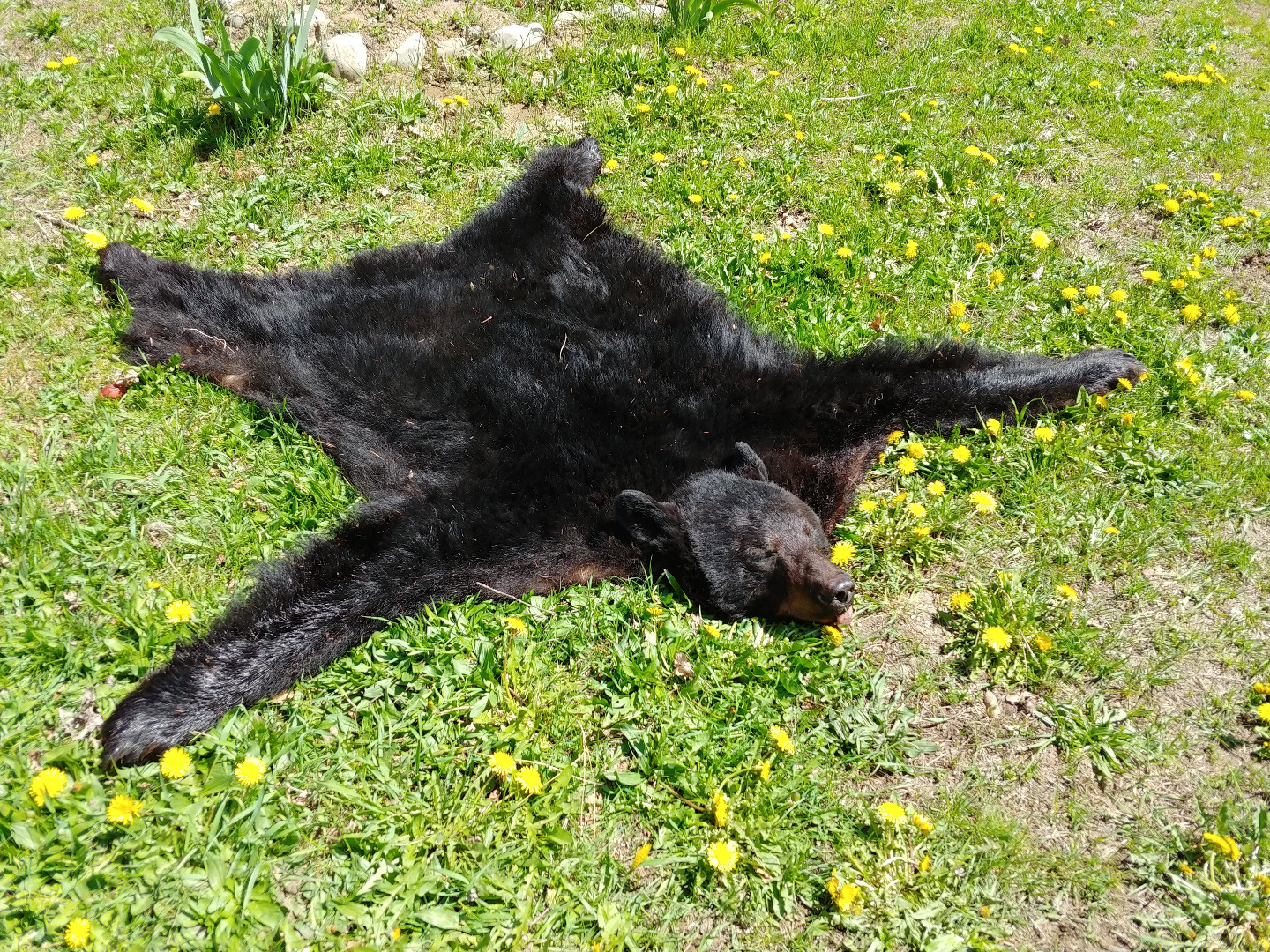 The hunt begins like many other spring bear hunts with an excited drive away from the PNW coast to the mountains of Montana. It’s always an energetic drive with stories of previous hunts and conversation around life for the past year. For me I enjoy catching up and building friendships about as much, if not more, than the actual harvesting of an animal. There’s something to be said about a group of like minded individuals trekking out to the woods in search of their prey.

I remember being dropped off at the bottom of a road with my bike. It was the afternoon maybe around 2 or 3 as we typically do. I believe we were on day 2 of the hunt. The plan was to walk up the road, take the first gate to the right, then explore any offshoots on the main road meeting up with Trevor and Bobby sometime around dark. Trevor and Bobby were going to drive around to another gate that meets up with the road I would eventually be on.

The walk up was a slow one. This road had an aggressive climb almost the whole way. Twisting and turning as it climbed up to the gate. On the way up, around a bend, I ran into a Sow and 2 cubs. I slowed up and sat in the middle of the road about 50 yards from them so she could see me. The sow was feeding off the side of the road and the cubs were playing on a downed tree. After about 20 minutes of watching them I stood up hoping she noticed me. I needed her to run the cubs off so I could pass and continue my journey. I had to make a little noise but eventually she moved on and I continued up to the gate.

Once at the top and taking the gate to the right I continued along. I noticed gates on my left however I must have forgot to take them. Eventually I met up with Trevor and Bobby on the main road in a clear cut where the road bends around a draw and you can see it climbing a little on the other side. Little did we know this spot would eventually be important. Trevor was a little worked up as we met too soon. There was still daylight and we needed to cover some ground. We decided to go back the way I came with Bobby taking the first road to the right and Trevor and I going up to the second. The road Trevor and I walked became a little overgrown and eventually snow covered. It was less than ideal to spot a bear so we decided to get out of there quickly. We hopped on the bikes and rode down to the clear cut where we met earlier.

Upon pulling into the cut Trevor noticed a black spot across the canyon below the road, it was a bear. We jumped off the bikes quickly and hid at the edge of the road behind a stump. We watched him feeding for some time and ranged him between 250 and 275. Honestly I’m not sure how much time passed from spotting him and the shot but Trevor assured me he was a nice bear so I used the stump as a rest, slowed my breathing, aimed and let one fly. The bear started going diagonally downhill and Trevor said to hit him again. I worked the bolt, took the rest, aimed and sent another one. The bear was gone. No movement, no sound. I forget how or when we met up with Bobby again but I remember it was getting late and light was fading fast. We worked our way over to the other side of the road above where we thought the bear was. We decided it was best to come back in the morning early and go down to search for him given the grade on the hill, our uncertainty on the exact location, and our fading light situation. The ride to the gate was interesting, although we had lights I don’t recall using them and riding a bike in the dark on dirt roads with rocks and branches can prove to be painful. Lucky we all made it without injury.

That was a long night. The feeling of shooting an animal and not knowing if it’s hit or not doesn’t sit well with me. The last thing I think any hunter wants is a wounded animal suffering. We strive for a quick clean kill and in times like this it eats away at you.

In the morning we headed out before first light. We made it to the gate and headed to the spot we believed to me above the bear. Bobby continued along to hunt some of the offshoot roads while Trevor went down to find the bear. I stayed up on the road to help guide him. After some time it was clear I needed to go over to where I shot and help get Trevor on course. Through knockers and hand signals we communicated back and forth and I put Trevor on the spot we last saw the bear, my second shot. I then moved back above Trevor and waited for Bobby to join us. At this point we are probably 3 to 4 hours into recovery. Trevor called Bobby and I down to help in the search. We side hilled down some of the steepest terrain I have encountered using plants and trees to keep balance. Upon meeting up with Trevor he had a plan where Bobby would go to the left, I would go in the middle and he would go to the right so we could cover more ground and canvas for the bear. Little did I know he found it and was leading me to it. As we started walking I looked back and noticed he was recording me, feeling this was odd I asked him where it was. About 25 yards in front of me, down the hill, under some trees and by some downed logs he took his final breath. Upon seeing him laying there I dealt with a whole host of emotions. Excited I got my first bear, sad he had to die, grateful for the experience with Bobby and Trevor, exhausted from the hunt and the work ahead.

We propped him over a tree and got to work harvesting him. On such a steep side hill it’s good there were three of us to make quick work. We packed him into a pack and worked our way up the hill. Again grabbing anything to help stabilize the climb up to the road. I remember being out of breath reaching the top but it was all downhill from here. I don’t know what I expected for my first bear but I can tell you I wouldn’t have wanted it to go any other way.