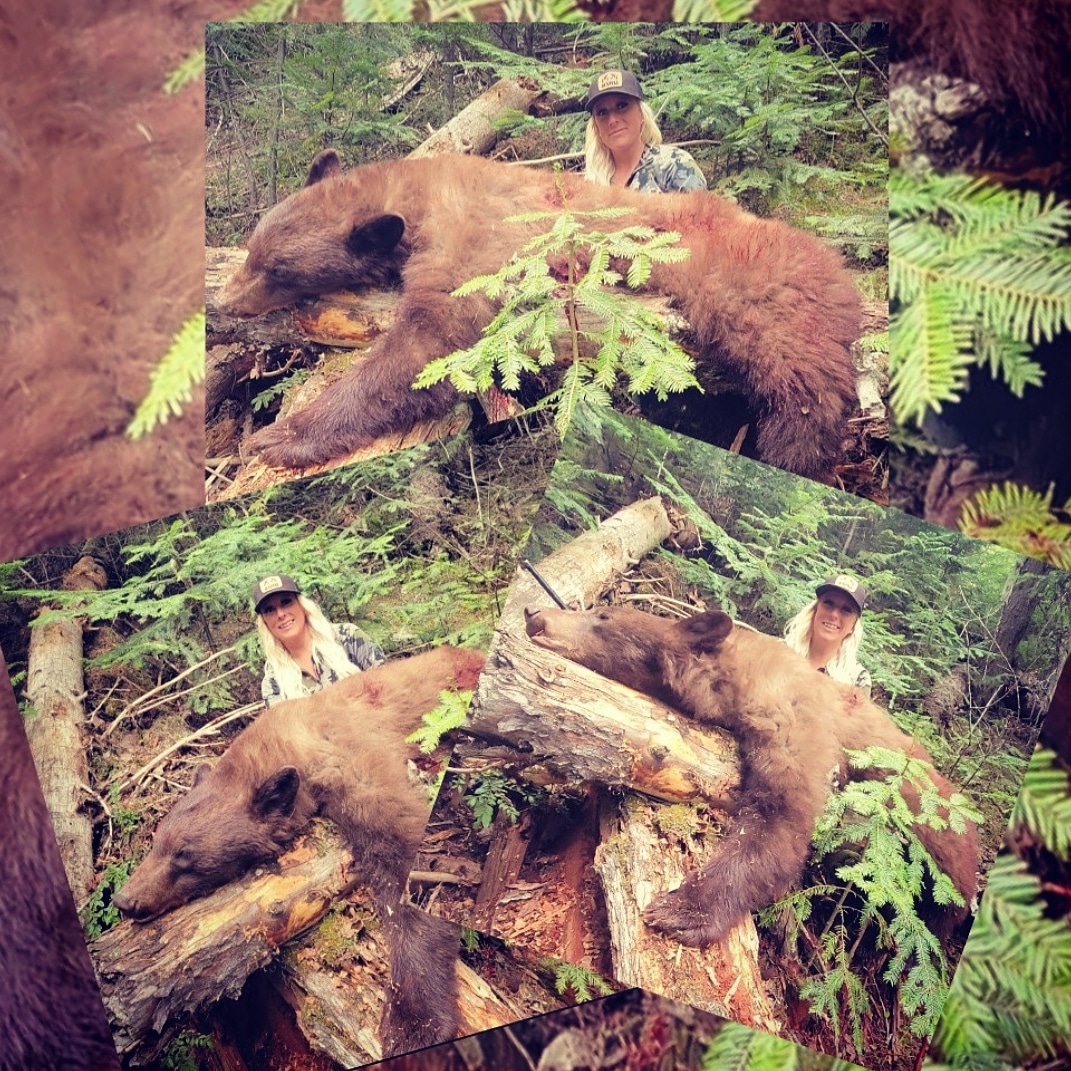 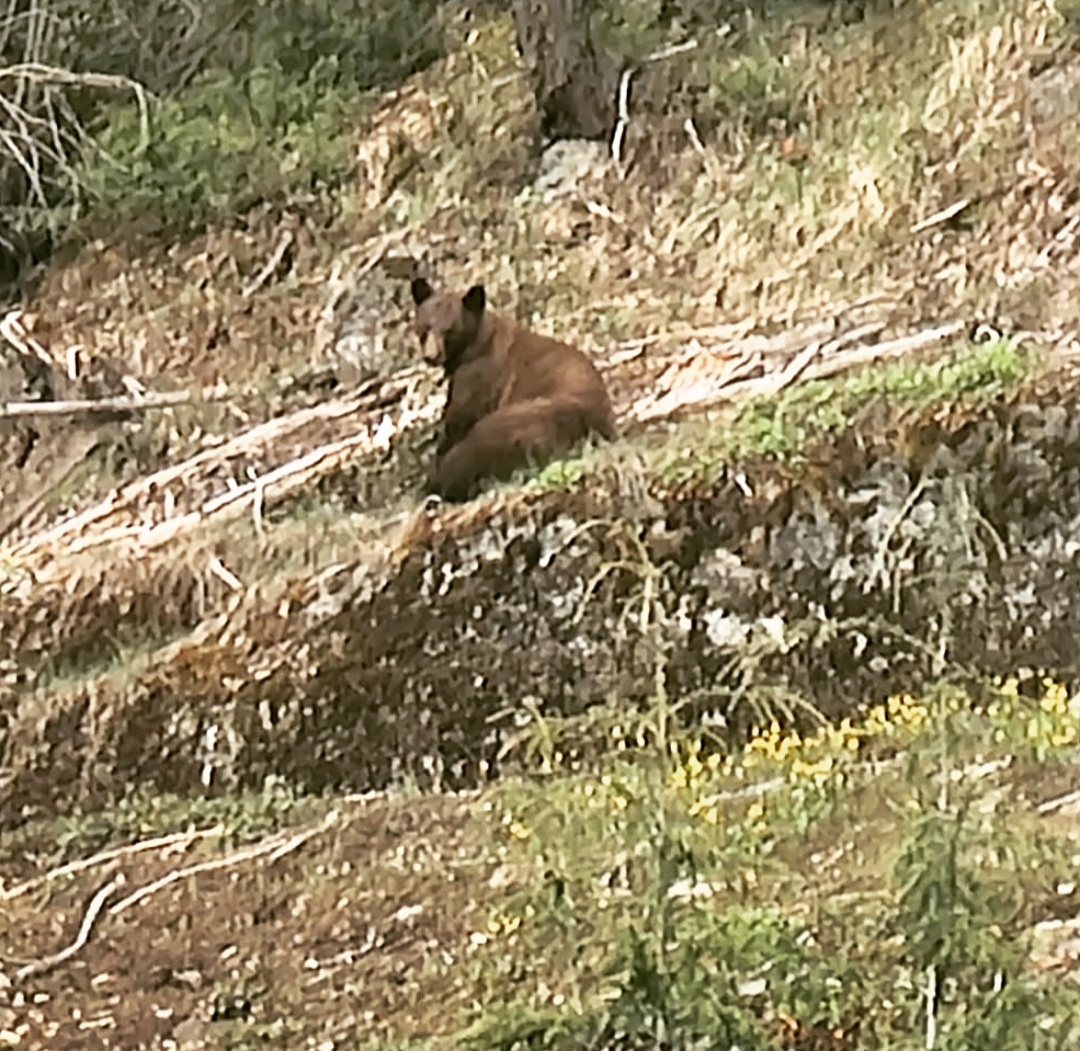 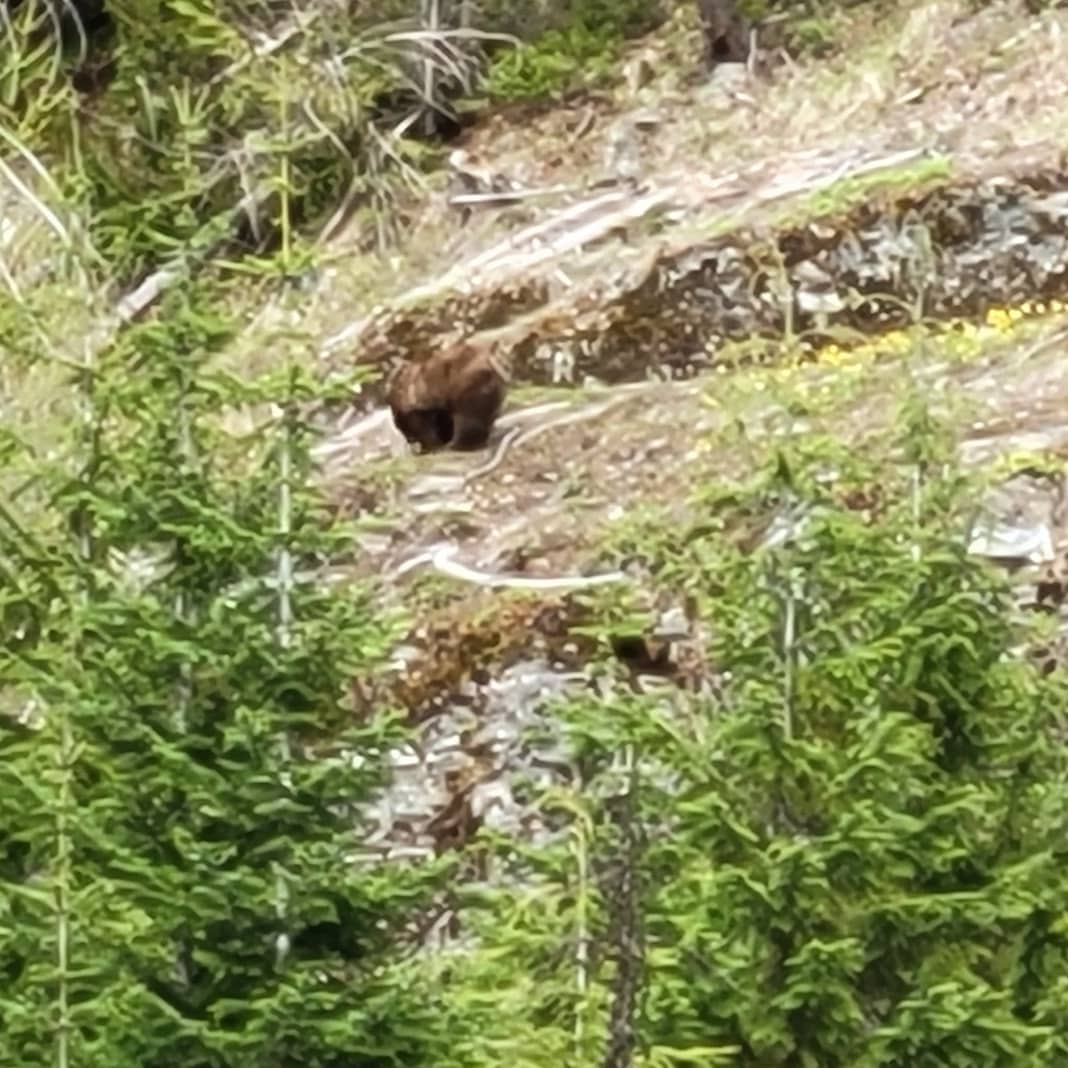 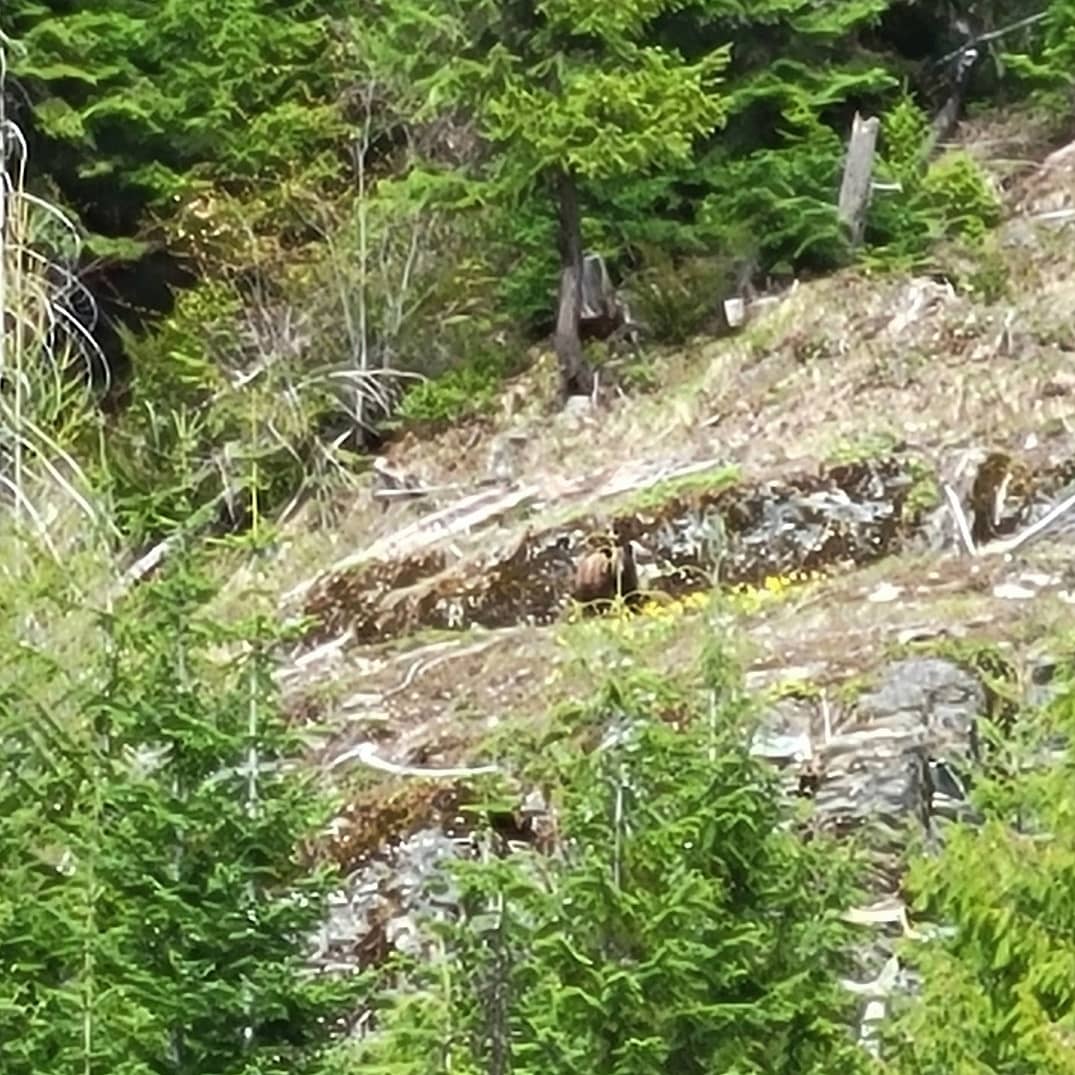 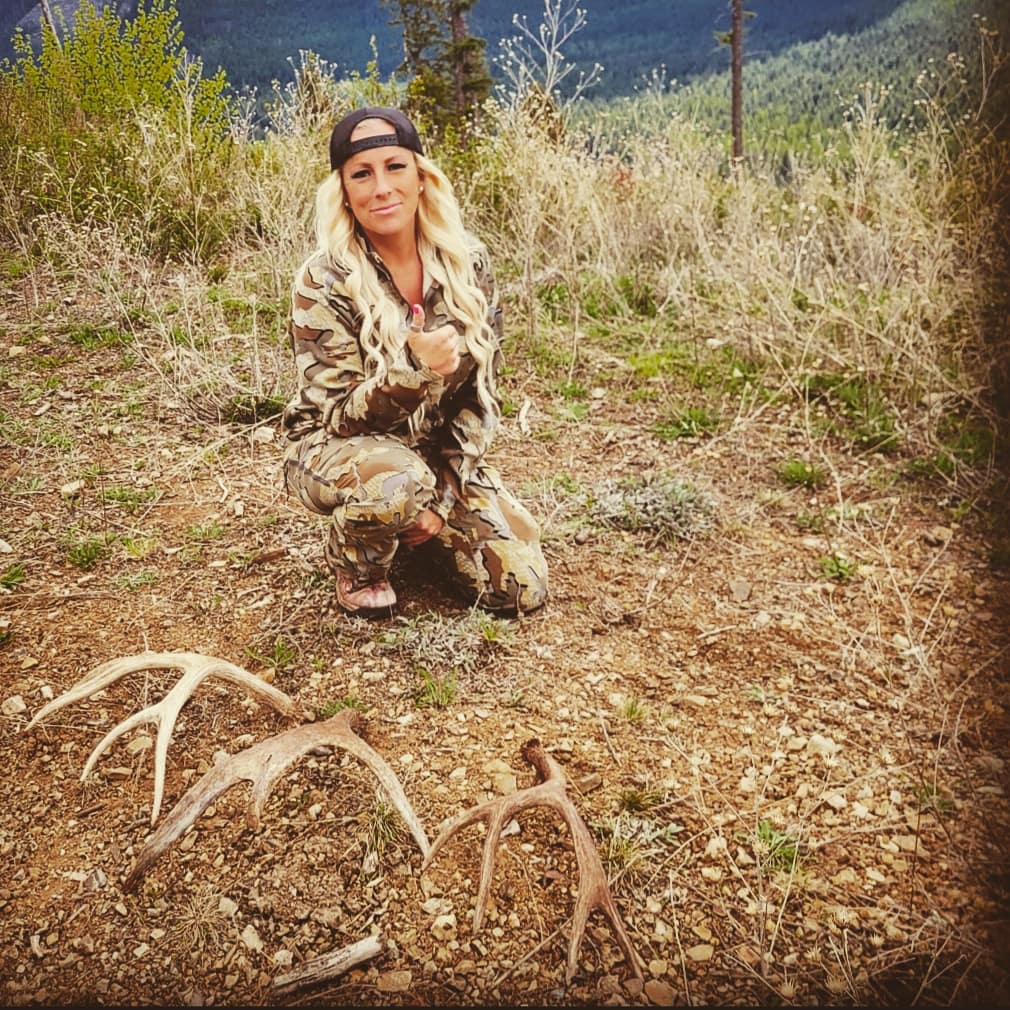 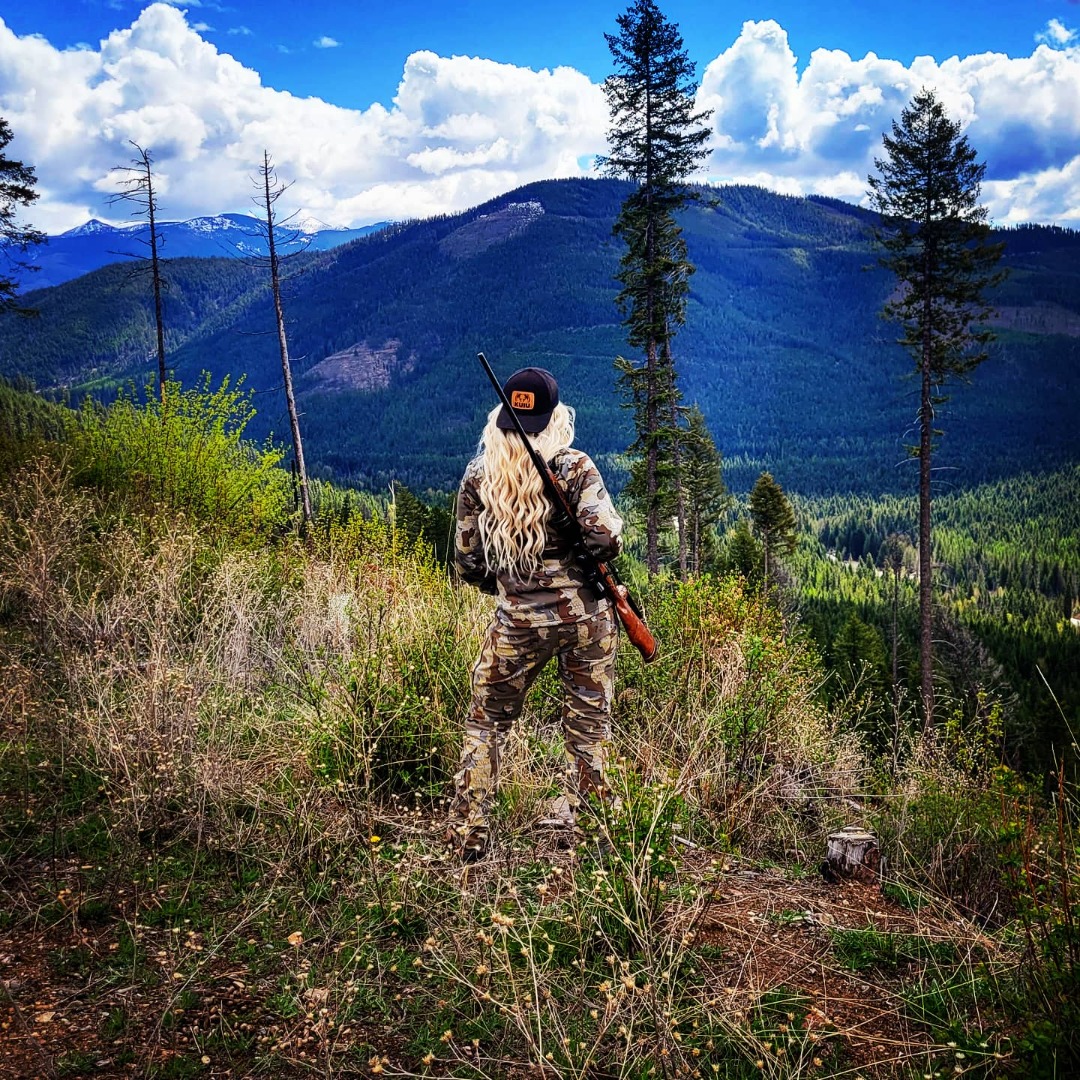 There’s nothing more that I look forward to than the spring bear hunt in Montana. It’s my absolute favorite! The daily daydream of next year’s bear hunt begins as soon as we pull away from bear camp.

This year’s hunt was tough; the bear weren’t on the roads like they normally were, there was little sign and we were running into hunters around every other bend which was highly unusual.

This year I arrived on April 30th, my dad and I always get super eager to go and are usually the first ones there. We hunted hard several days before anyone else arrived and this year we thought we may have a bit of an advantage because we had the coveted Ebikes. Unfortunately, they didn’t work like we had hoped they would. Mine kept powering off after about 15 minutes and then I was stuck pushing the heavy bike until it would cool down and finally work again …for another 10 – 15 minutes. But even with the bike issues we still managed to cover alot of ground and even got lucky and found some road sheds along the way.

May 10th rolled around and by then the rest of the crew had been there for a few days and we had only seen a handful of bears so we decided to change things up, head to a different area, “divide and conquer.” The plan sounded great but it didn’t pan out like we had hoped. We drove all over and didn’t see a bear all day so our group decided we’d head back to the cabin and maybe get lucky on the way back before dark. Well as luck would have it just after 6 pm our friend Kelly was sitting shotgun and thought he spotted a bear laying down across a ravine. He had my dad back up a little and sure enough a brown bear was sitting up in an opening. We were all totally impressed with his spotting skills because the bear blended in with the hillside so well. But really, we were all just so excited to finally see a bear after such a long day.

We all watched the bear as it sat there then slowly got up to its feet to feed. You could tell it had just woke up from a solid nap because of how sluggish it was moving. As we glassed there were several comments of how pretty of a bear it was and things were being said like “boy… that’s a good bear!” Then the comments quickly changed to me and I was being asked if I was going to shoot it. I quickly directed it back to Kelly since he spotted it and told him he could shoot it but he quickly passed saying he had plenty of bear and I could shoot it. I scanned the bear over again an said I didn’t want it because it looked like a sow to me. The three more experienced hunters with me (my dad, brother and Kelly) looked it over again and they said it looked like a boar. I argued a bit more saying it was a sow and passed again eventhough I wanted a brown bear and had told myself that was the only way I was going to pull the trigger this year.

We decided to “be bold and press on” and as we pulled away a slight guilt and questioning of my decision came over me. They all seemed shocked I didn’t shoot it. My brother Trevor, didn’t have a tag this year but said if he would’ve had one he would’ve definitely shot it. Then I started thinking how long I had been there an how hard I hunted and finely spoke up and said “turn around… let’s go get it.” So we flipped around an went back and looked across the ravine where it was and it had disappeared. We paced back and forth looking between trees trying to spot it and as luck would have it, we spotted it again through a small opening in the trees. I hurried and got steady, took a deep breath and pulled the trigger. I knew I hit it but it took off down the mountain which was a first for me. The two bears I had shot in the years prior (as well as my elk) all dropped dead in their tracks…. the panic instantly set in. We paced back and forth trying to see where it went and stood quietly to try listen for it. My brother walked up to me and said it sounded like it climbed a tree and we needed get over there. So we quickly gathered a few things and found the best spot to drop down the side hill we were on. The descend was a bit rough due to all the rocks and the ascend on the other side of the ravine towards the bear was thick with trees and tree dead fall. As we quickly maneuvered up the mountain we then heard the bear moving more up a tree as well as it began to making hissing sounds. We quickly found the tree it had climbed and I stood under it trying to get a good angle to shoot as it continued to move around the tree. This was all a new experience for me, I had never “treed” an animal let alone shot one out of a tree or at that “straight up angle.” To say I was shaking would be a understatement and I was sweating up a storm. I flung a bullet at it not 100% sure if I hit it again as it continued to move around the tree. I then panicked “…it’s going to fall right on us Trevor…” We shuffled back a little and seconds later the bear came flying out of the tree landing right at my feet and right where I was standing to shoot moments earlier. The bear was still moving at my feet I hurried and let another bullet fly and stumbled backwards over a log as I was trying to get away from it. And just like that, it was over. What a RUSH!!! My brother and I looked at each other eyes as big as tennis balls and instantly started smiling and laughing and basically in shock about what just happened. We couldn’t believe it! Neither of us had ever experienced anything like it before and we instantly knew this would be one of those experiences that neither of us would ever forget.

After talking, laughing and catching our breath we hollered over at my dad and Kelly and told them we were fine and to head our way. We finally took a good look at the bear and started taking some pictures while we waited for my dad and Kelly. Sure enough the bear was a sow like I had thought but it was a beautiful colored sow with a story I wouldn’t change for anything. What an awesome experience to have with my brother!

Hunting to me isnt all about punching the tag, it’s really about all the memories you create and the people your with. Because if the memories you make hunting are more important than the kill, you may be a sportsman. As Fred Bear once said,”Go afield with a good attitude, with respect for the wildlife you hunt and for the forest and fields in which you walk. Immerse yourself in the outdoor experience. It will cleanse your soul and make you a better person.”