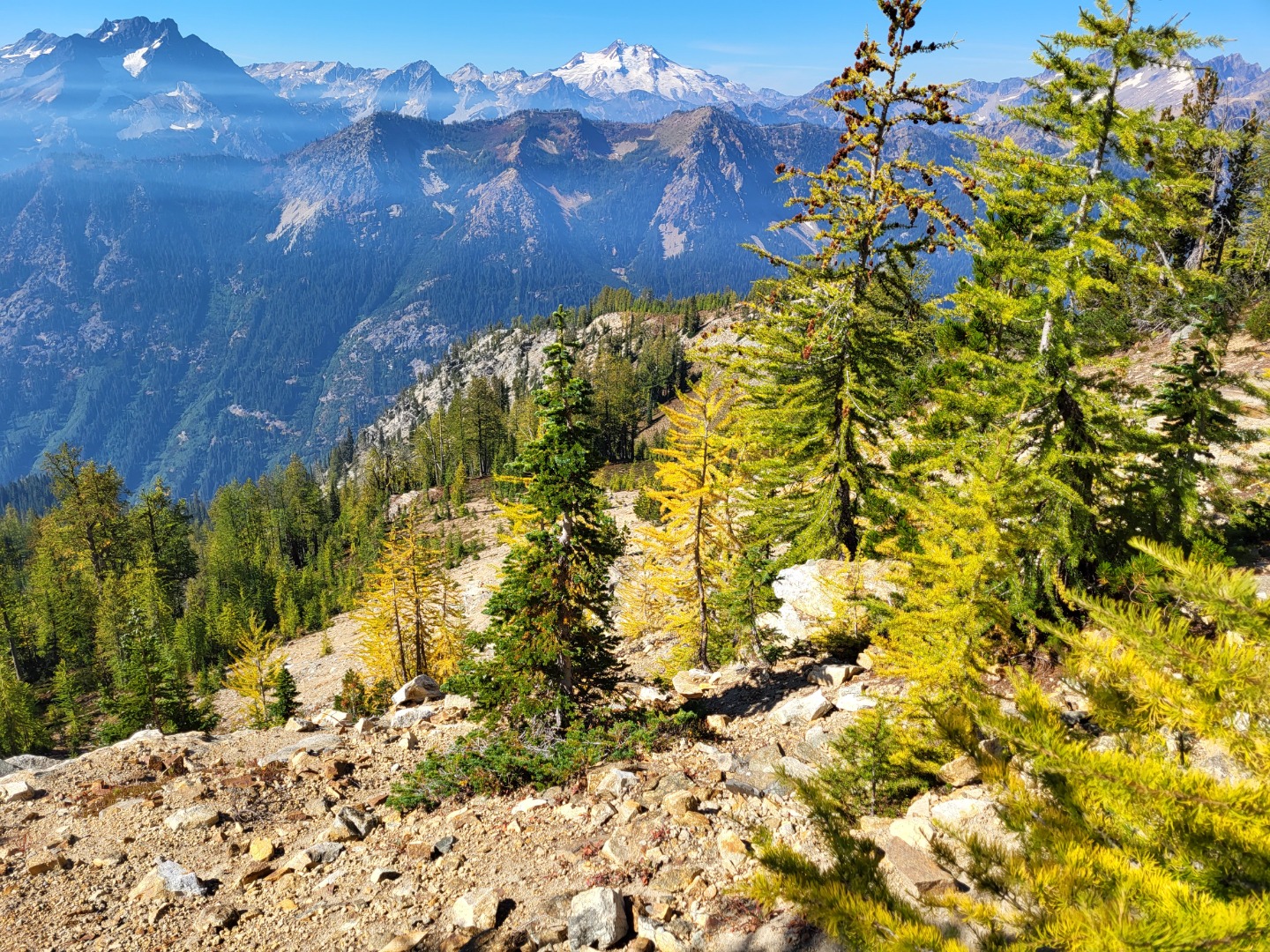 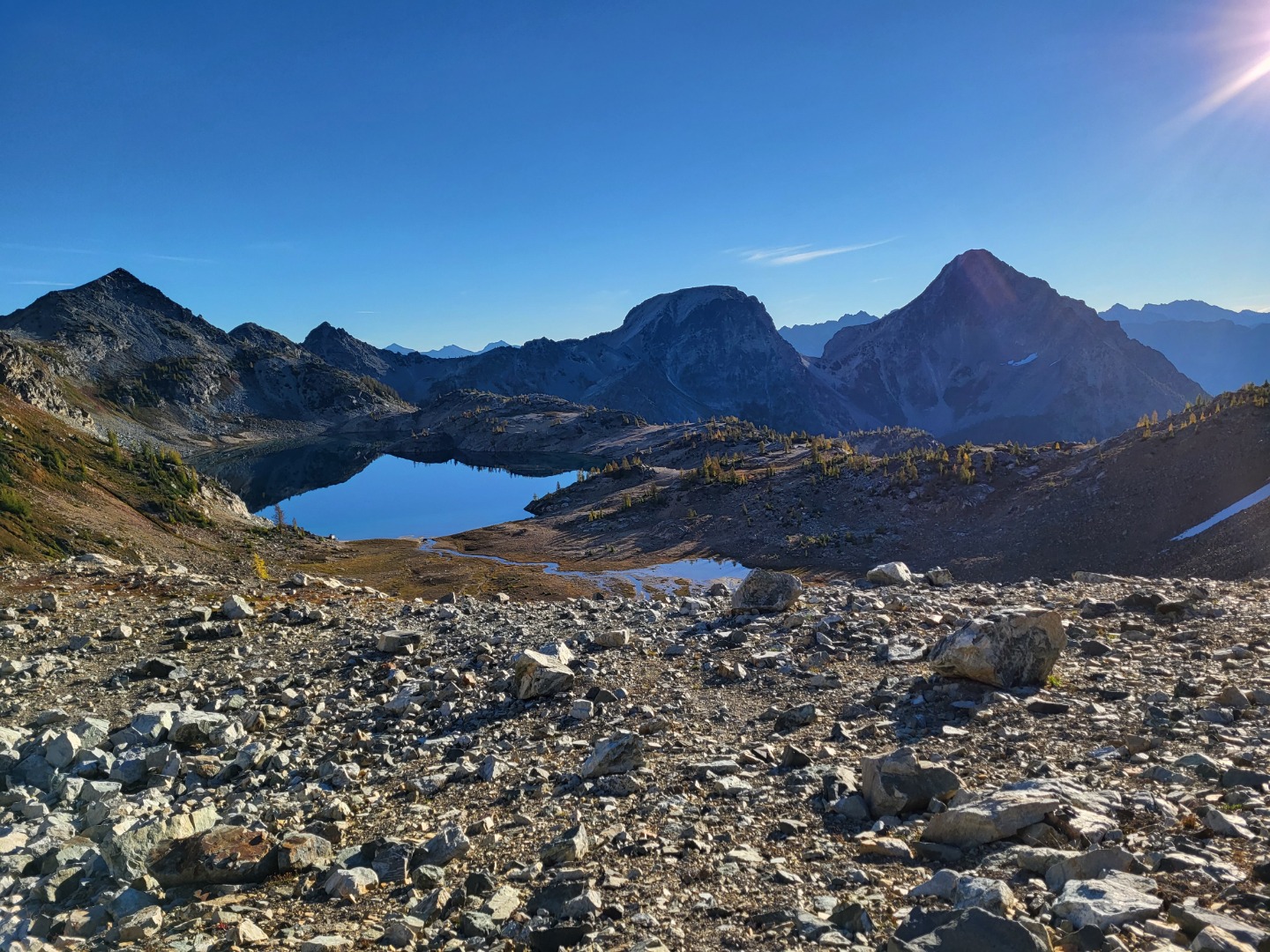 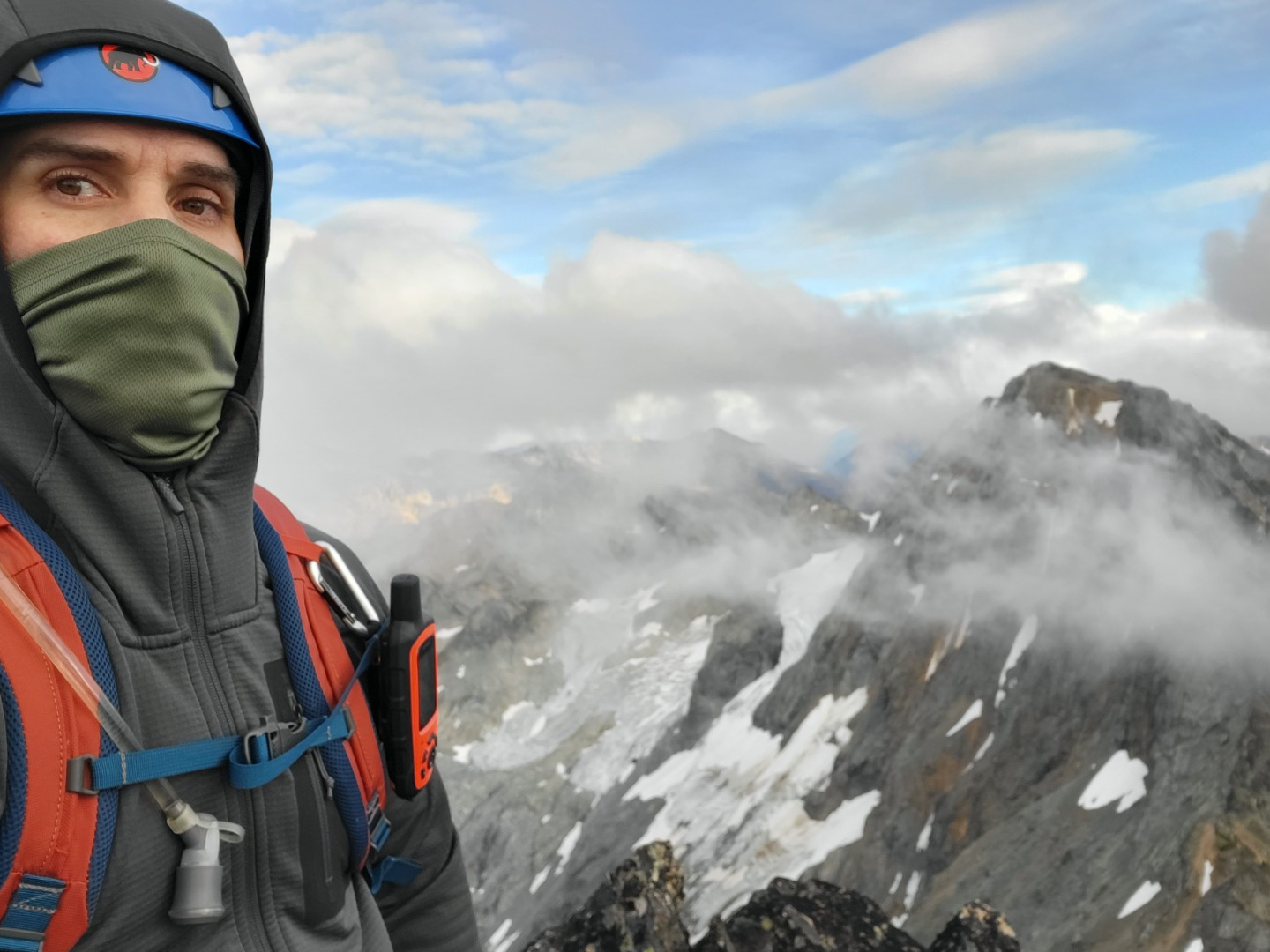 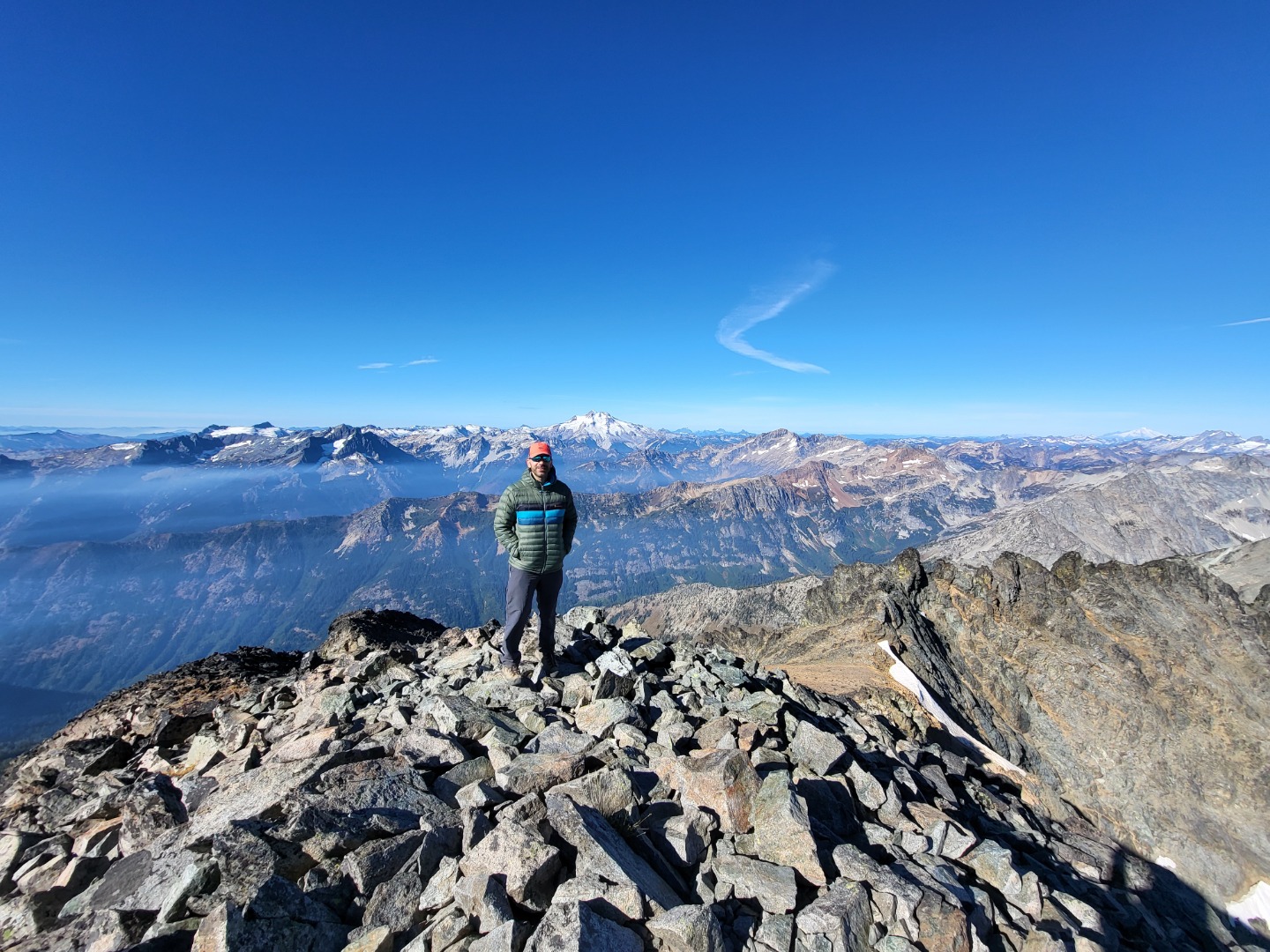 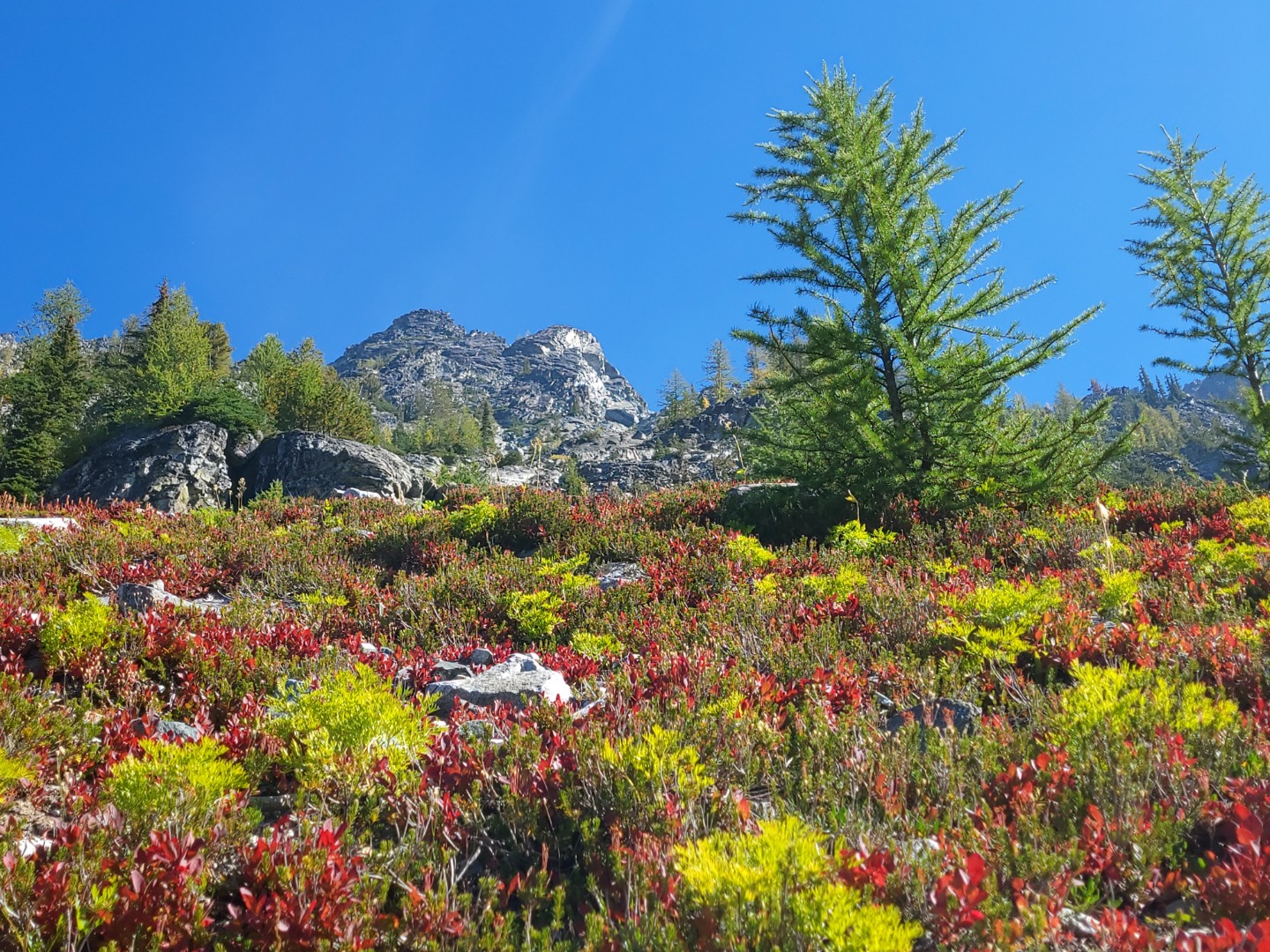 Fall climbs are an awesome time of year in the mountains! You get cool mornings and evenings, sunny days and of course the fall colors are in full effect. This fall I was determined to tackle a few more Bulger Peaks(Washington’s top 100 highest mountains) before the dark gloomy weather settled in. I asked numerous climbing friends to join me on this journey, but all were too busy in their daily lives.
I decided to go on this journey and tackle this goal solo. Not popular amongst friends and family, but I felt confident in my climbing skills and how I prepared for various situations in the mountains. I started about 5:00am on Friday morning driving towards Leavenworth. The biggest concern in my head, of all the things that could south, was running into forest fires. I drove past Lake Wenatchee, Fish Lake and on one of the worst unpaved roads I ever encountered, for another hour until I reached the Phelps Creek trailhead. With much hesitation, I threw on my 70lb pack that would carry my house, food, and clothing for the next few days. It was a gentle trail running parallel to Phelps creek for about an hour. When the junction to Leroy Creek arrived, the trail abruptly started climbing for 2500 ft elevation gain over the next few hours. I reached the basecamp of Leroy Basin at about 6400 ft elevation, where I could finally unstrap this pack and let my legs and shoulders rest. My next move was to setup my tent and find a solid spot around the basecamp area. I had the area all to myself, so I was able to find a great spot with a direct view of Seven Fingered Jack and the entire Leroy basin.
Seven Fingered Jack was my first mountain objective to finish off this day. 7FJ stands at 9,100 ft and is part of the Entiat Cirque of 9k Mts all in close proximity, including Mt. Fernow and Mt. Maude.
I started off towards 7FJ around 2:30pm in the vey warm afternoon. I instantly regretted not bringing shorts for this climb, but compensated by rolling the pants up! I made my though some beautiful larches and alpine meadows gaining a few ridges towards 8k ft. I spotted a few marmots, that were a cool black/silver color, eating in the alpine meadows. At about 8500 ft I was excited to see some class 3 (more exposed rock climbing) areas going up, and with a couple more pushes I was at the summit of 9,100ft! Behind me was a direct shot of Glacier Peak, standing prominent at 10,500 ft. In front of me a direct drop-off down the north side and a view of the Entiat Glacier on the north side of Maude.. At the summit the weather instantly changed, with winds and clouds coming in. I snapped a few photos, threw on my gloves and high tailed it back down. It was looking like 100% I was going too get rained on and somehow all the clouds bypassed me. Leaving the summit at 5:45pm I knew I was racing against daylight. The last stretch required a headlamp back to my basecamp, which I navigated with no issues. As settled in my tent for the night I realized I did not see one soul on the trail or mountain today. It didn’t bother me, I was at peace with the wilderness that surrounded me.
The next morning my goal was to setoff and summit Mt. Maude (9,082ft), slightly smaller than 7FJ by about 20 ft. I was woken up by other climbers that made their way to basecamp and were getting set for their climb. I departed my tent about 5:30am and started on a traverse trail that took me from 7FJ to what’s called Freezer Pass. I had my first human encounter and ran into another climber. We learned our objectives were just reversed…She already climbed Maude and now was going after 7FJ, where I was opposite. Like many other climbers, we shared intel of the routes and wished each other good luck.
When I reached the second pass, my confidence sank a bit. The route entailed descending another 500 or so feet, going across boulders and snow gullies and then what looked like starting at the base of Mt. Maude. I told myself its still early in the morning, stop complaining and just keep moving forward. When I ascended up the snow gullies I had a direct shot east, which looked like another world. There stood North Spectacle Butte, South Spectacle Butte and Ice Lake, which looked amazing in the morning sun. Once I gained the ridge of Maude, its fairly straightforward to the summit. I needed to keep breathing, power forward and take in the incredible views. I made the summit at 10am and quickly grabbed a few photos before the weather changed. I actually had service in and out and was able to facetime my family. A few other groups made their way to the summit top as well and we shared in our routes and journeys for the rest of the trip.
As I made my descent down, I was incredibly grateful for the opportunity to be out in the beautiful Glacier Peak Wilderness as well as have the ability to climb two very intense 9k peaks back to back. Two Bulger Peaks down on this trip and many more to conquer!!!